Apple’s iPhones tops the least of the least depreciating smartphone brands, according to new data from Sellcell, a site for selling phones online.

SellCell, with the help of its phone buyback partners, took into account five of the well-known players in the smartphone business: Apple, Samsung, Google, Sony, and LG. 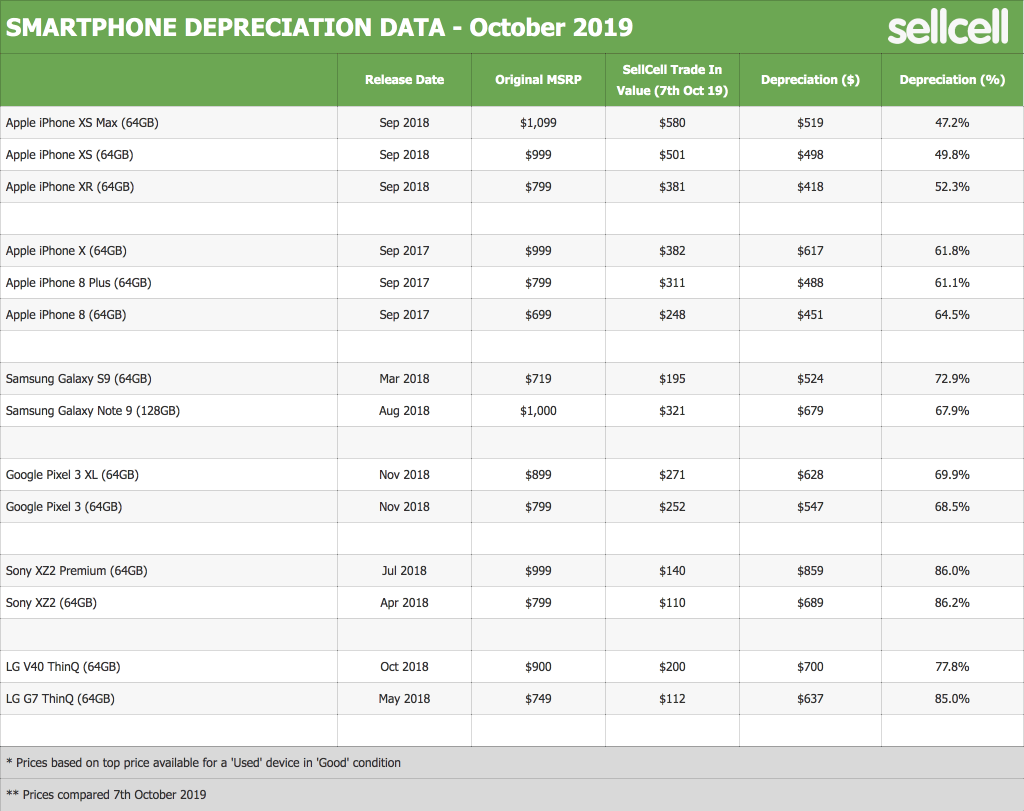 This year’s results go in line with that of last year’s for the most part. Apple once again blows the competition out of the water, retaining the first position as the least depreciating smartphone brand.

Sellcell says the best at holding its value is the $1,099 Apple iPhone XS Max, which has lost only 47.2% of its value in a year since its release, making it worth $580. The next five places in the Sellcell chart are occupied by one or another iPhone.

The results also resonate with Sellcell’s survey on brand loyalty published in August, which tagged Apple fans as the most loyal bunch. Other 2018 iPhones, iPhone XS and iPhone XR show impressive value retention status as well, with depreciation rates at 49.8% and 52.3% respectively.

Priced $999 at the time of launch, you can now trade-in an old iPhone XS and still get more than half the original value at $501. In the case of the latter, the going trade-in price is $381.

Apple’s 2017 iPhones still holding its value higher than 2018 flagship offerings from other brands underline the Cupertino giant’s reputation for producing worthwhile handsets that remain high in demand even in the second hand and refurbished markets.

The 10th-anniversary special edition from Apple, the iPhone X, will still fetch you $382 through trade-ins, having depreciated only 61.8% of its original value over two years. The story is not very different in the case of iPhone 8 Plus and iPhone 8 that were released alongside the iPhone X as they still retain close to 39% and 35.5% of their value.

Although Samsung and Google make some of the best Android phones, their handsets don’t retain the value nearly as well  as the iPhones, notes Sellcell.