Eltima describes its Commander One as a “Finder alternative.” However, I’d describe it more as a handy Finder “enhancer” that’s great for macOS “power users.” And it gets even better with the recently released version 2.0.

A dual-panel file manager for macOS 10.10 or higher, it allows you to use two panels at once, set up your own hotkeys for a variety of actions, and more. Commander One doesn’t come with a PDF manual (you download the software, so I wasn’t expecting printed instructions), so there’s a bit of a learning curve.

Eltima’s introductory “Welcome” screen helps get you started, but other features need an explanation. For example, choosing between the “dynamic” and “bytes” for the “size in apps” under the View preferences will certainly be as clear as mud to novice users. 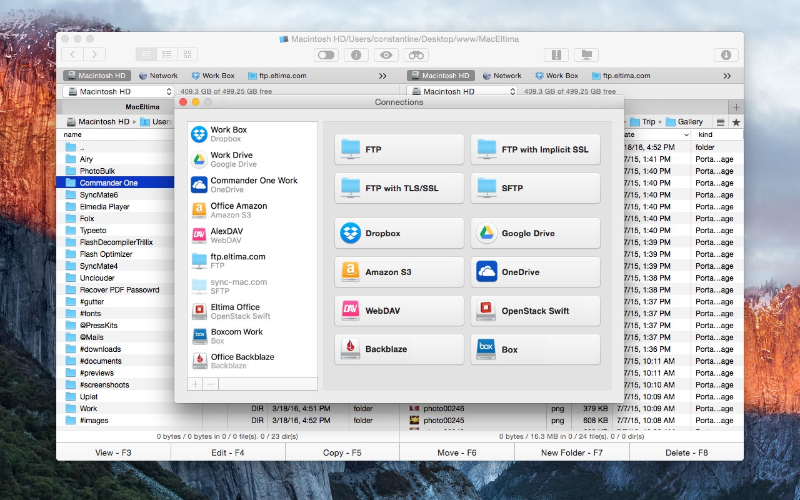 When you launch Commander One, you can choose among three view modes depending on what you’re doing and what sort of data you’re working with. The views — Full, Brief, and Thumbs — will be familiar to Mac users. They’re similar to the List, Column and Icon view in Yosemite (there’s no Cover Flow equivalent, however).

Commander One also has a toggle switch to let you show or hide “invisible” files. Most folks don’t realize that there are hidden files in macOS. Normally, that’s a good thing as it prevents accidental interference with the inner workings of your Mac. Generally, you don’t need to mess with them unless you know what you’re doing. However, if you feel the need to do so, it’s easy to find ’em with Commander One.

Commander One packs some powerful search functions. You can search for files and folders on any disks — even compressed ones.

You can use Regular Expressions for more precise searches and make them case sensitive. If you can’t remember the name of a document, you can search for the words inside it with flexible settings and even choose text encoding. In addition to its built-in search engine, you can also use macOS Spotlight.

Whenever you’re moving a file or a folder you can change its name — something that Apple should make easier to do in macOS. If you’ve started an operation and it’s taking too long, it can be queued to finish in the background.

Commander One has lots of customization options under the Preferences menu. You can set up hot keys for a variety of actions. You can enable or disable extensions such as Bonjour computers, iOS devices, MTP devices (which allow media files to be transferred to and from portable devices automatically), and the Process Viewer (which shows how apps and background processes are affecting your Mac).

Commander One 2.0 is free, but Eltima hopes you’ll spring $29.95 for the pro version. For those who need still more power, it’s worth the money.

The pro version adds an FTP manger, a terminal emulator, the ability to mount MTP and iOS devices, the Is Commander One for you? If you’re happy with the macOS Finder, probably not. If you consider yourself a “power user” and want the ability to tweak and fiddle with the functions on your Mac, you’ll find it very handy — especially the pro version.

In addition to the product website, Commander One is also available at the Mac App Store.