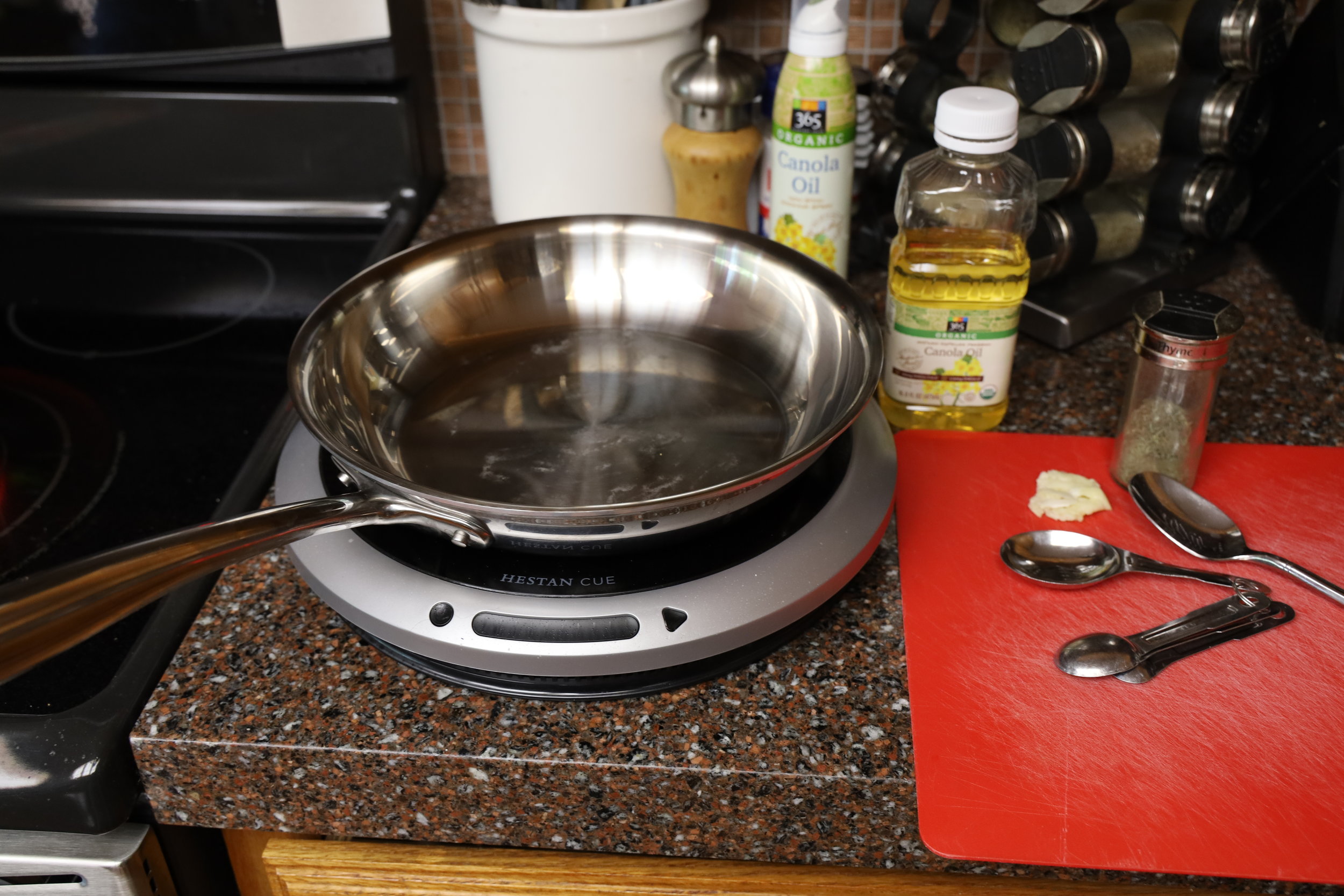 One of my favorite Pixar movies is Ratatouille, in which a French chef by the name of Gusteau inspires a rat to become a gourmet cook. Gusteau’s tag line in the film is “Anyone can cook”, but the sad truth is that many people limit themselves to fast food, easy-to-prepare store-bought entrees and the like after having one too many meals turn out undercooked or scorched. The Hestan Cue Smart Cooking System consists of an app-controlled inductive cooktop, an 11-inch “smart pan” or chef’s pot with embedded sensors, and the Hestan Cue app (iOS or Android), all of which work together to make sure that home chefs get the best results every time.

The concept behind the Hestan Cue Smart Cooking System is “guided cooking”. Think of having your own personal professional chef helping you out at every step of making something in your kitchen. He tells you what you need to buy at the store, how to prepare for cooking (even to the point of showing you how to chop onions if you’re brand new to cooking), sets the temperature perfectly for the food being cooked, and even tells you when to flip the meat or stir the ingredients.

You don’t actually get a professional chef to stand next to you, but the app recipes are the next best thing. They’re created by a team of top professional chefs from famous restaurants around the world, and go through a rigorous testing process prior to being released.

What if you like your salmon a bit rare and your steak more well done? The Cue system has you measure the thickness of your protein, then asks how you’d like that food cooked. Once that information is gathered in the app, it calculates just how long something needs to be cooked and at what temperature. The app controls the temperature by monitoring the temperature of the pan surface and increasing or decreasing the power to the inductive cooktop if needed.

Most steps of the recipes include short videos to demonstrate how to do something, whether that’s folding scrambled eggs in on themselves with a spatula or basting a salmon filet with a savory oil.

The Inductive Cooktop and Pans

The Hestan Cue Countertop Induction Burner ($299.95) is a round spaceship-looking device about 12-1/2 inches in diameter and about two inches high. The top is a ceramic surface that’s easy to clean, and the external controls consist of two buttons (power and “next”) and a slider, all of which are touch sensitive.

Under that ceramic surface is a powerful 1600W induction burner. If you’re not familiar with induction cooktops, here’s a description from Wikipedia: “In an induction cooktop, a coil of copper wire is placed under the cooking pot and an alternating electric current  is passed through it. The resulting oscillating magnetic field wirelessly induces an electrical current in the pot. This large eddy current flowing through the resistance of the pot results in resistive heating.” 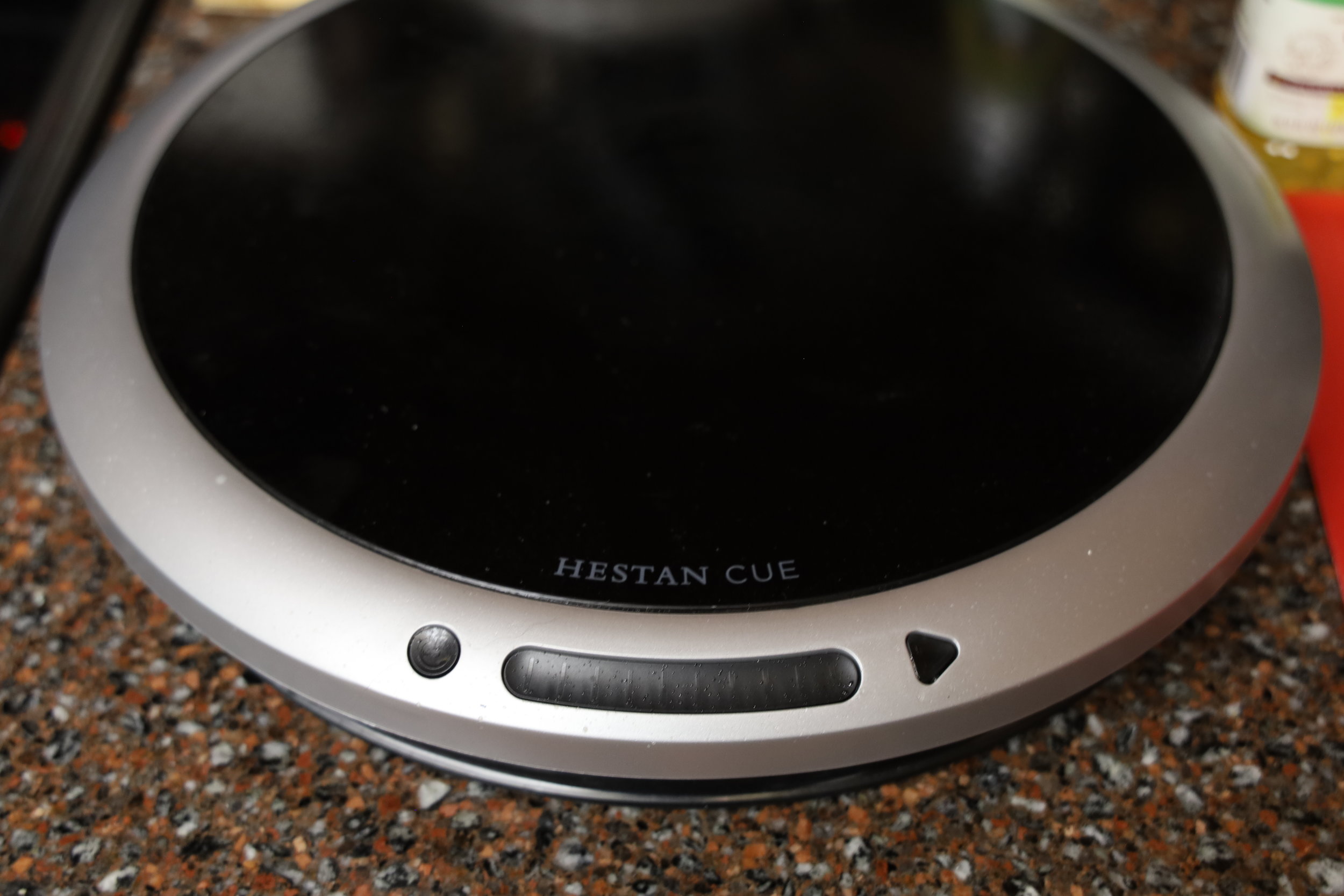 The Hestan Cue 11-inch Smart Pan ($199.95) is a stainless steel cook pan with sensors in the bottom connected to the other components via Bluetooth. Owen Wyatt, Senior Culinary Development Manager at Hestan and a talented chef, noted that early versions of the system used a different RF technology. They switched to Bluetooth as early prototypes had interference problems in houses and kitchens with many wirelessly connected devices. The Bluetooth transceiver and “brains” of the pan are located at the tip of the handle; it’s powered by a single AA battery and the handle is easily opened by turning that tip.

The other piece of cookware is the Hestan Cue Chef’s Pot ($299.95), a covered 5.5 quart pot with the same smarts as the pan. As you’ll notice, the prices are a little high for cookware, but this is all very quality equipment from a company that also makes high-end professional kitchens. Fortunately, you can bundle the Burner and Smart Pan for $399.95 or the Burner and Chef’s Pot for $499.95 and save a bit.

As I mentioned, the Hestan Cue app ties this all together. The app currently features over 500 recipes, everything from the best damned scrambled eggs I’ve ever had to protein-and-sauce combos that you’d expect at a gourmet restaurant. My only issue — and it’s apparently a common one — is that the iOS app shows up only in portrait mode on the iPad, and for those who use iPad keyboards it’s unusable. That’s not really too much of an issue if you also have an iPhone, as the app works flawlessly in that device.

The app makes it easy to browse for recipes, and even if you don’t have the Hestan Cue system, I suggest downloading the app as it has a huge variety of recipes — all with guided cooking instructions — for traditional ovens and cooktops. If you have the pan or pot, you can filter search results by that particular piece of cookware. A number of international cuisines and dietary restrictions are also covered with a number of recipes.

Mix and Match is fun, as it has you select a protein (meat) and then choose one of a variety of sauces to go with the meat. There’s also Control Mode, which allows you to set and maintain a precise temperature or power setting on the pan (or pot) without having to follow one of the app recipes. This makes it easy to cook your old recipes; as long as you know what the correct temperature should be, you can “set and forget”. With the temperature control mode, Hestan Cue varies the power to the cooktop to ensure that temperatures remain steady. With power control, the power is held steady, which means that the temperature of the pan continues to rise over time.

I wondered if there was a way to find out what temperatures are considered “medium-low”, “medium”, “medium-high” and “high” so I could use many older recipes, and sure enough the Hestan culinary team has produced a chart (link to PDF) showing the temperatures associated with each level and what results those temperatures produce with proteins and vegetables.

Now, I love cooking — I do all of the cooking in our family (lucky wife!) and like to try different recipes on a regular basis just to stretch my skills and not get bored. On occasion, I’ve been known to completely bomb a recipe by over or undercooking it, using a bad mixture of spices, or letting my attention wander while the dish is in a critical stage.

That’s why I find the Hestan Cue Smart Cooking System to be so refreshing. I know that if I follow the instructions and cues provided by the app, the dish is going to come out perfect. I started easy with the system after some oral surgery, making eggs — something I have perfected on our regular cooktop. Would you believe that they came out better using the Hestan cooktop and pan? Part of the improvement was using butter rather than cooking spray for fried eggs, imparted a wonderful flavor. But the even heating made the eggs less “chewy” than usual, which also improved the experience.

Scrambled eggs? I usually never make ‘em. I tried the recipe in the system and they were actually the best scrambled eggs I’ve ever had. Moist, flavorful, and fresh! If you’re used to buffet scrambled eggs (which are a crime against humanity), you’ll love the scrambles you get with Hestan Cue.

I “graduated” to meats with the pan-seared salmon recipe. My wife and I eat six-ounce salmon fillets once a week, and we like the salmon well done. My previous cooking technique was to lightly oil them, cover liberally with salt and pepper, and then grill them on a gas grill. They were always well done, but sometimes the flames created by the dripping salmon fat would cause crispy burned areas. Cooking them on the Smart Cooking System, we ended up with a perfect brown sear on both sides of the fillet and a much moister — but still well done — piece of fish.

I did get a chance to use Control Mode after I bought a one-pound, absolutely beautiful New York Strip Steak. I was planning on grilling it — my usual way of cooking steak — when a thunderstorm hit. I decided to try using the Hestan Cue to do a Pan-Seared Strip Steak…but it was too thick! The recipe only supported steaks up to 1-1/2 inches thick, and this monster was about 2 inches thick. So I decided to wing it with Control Mode.

I looked at the temperature guide and saw that 450°F was perfect for searing. I poured a bit of olive oil in the pan, heated it to 450°, then seared each side of the steak for two minutes. Next, I added two tablespoons of butter, some thyme, and some garlic to the pan. While the butter was melting, I turned the temperature down to 350°, then cooked each side for five minutes while basting the steak with the butter/thyme/garlic mixture. After that was done, I used my Meater smart thermometer to check the internal temperature, which needed to be at about 145°F for a medium-rare steak. It was still below that, so I finished the steak by cooking it for another two minutes per side at 350°. I took the steak off the pan and let it rest under foil for five minutes, and it was AWESOME. Yes, I’ll be uploading the recipe to the Heston Cue group on Facebook (check out the Community section below).

Have I had any “fails”? Yeah, one, but I think it was my fault. I was doing Sunny Side Up eggs one morning and used a pair of extra large egg instead of large eggs. The result was that the egg white wasn’t completely cooked. I just exited the app, turned up the heat on the burner with the touch control, and cooked the egg a bit more.

Hestan has brought together owners of the Smart Cooking System in a Facebook community that currently has about 900 members, according to Christina Chodony, Hestan’s “Culinary and Marketing Mastermind”. The community is filled with people who ask questions about “tweaking” recipes, share their own recipes that they’ve developed, and show some impressive skills in taking something simple — like a chocolate crepe recipe — and making a layer cake from the crepes.

Hestan also runs a well-done blog, and the company does an excellent job creating cooking guides for different types of meats. Oddly enough, the first one I saw was for pan searing Atlantic salmon, and it went into enough detail that if I try to get creative with a sauce or making blackened salmon, I know it will be perfect. The latest guide is all about pork chops, which got my salivary glands active enough that I’m picking up pork chops at the store tomorrow.

It doesn’t matter if you’re a seasoned chef or a complete rookie; the Hestan Cue Smart Cooking System produces excellent results that will impress you or guests. After all, it helps to have a culinary team leading you step by step through a recipe.